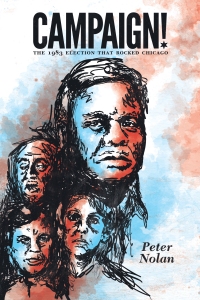 And now a message from our friend and author, Peter Nolan:

Have you grown weary of this early presidential election cycle? A little tired of Trump, Dr. Ben, Hillary, Bernie and the others? Are the relentless and repetitious cable news networks getting you down? And yet you’re still a political junkie. Take a little break. Go back over thirty years and take a look at CAMPAIGN! The 1983 Election That Rocked Chicago. Yes it was nasty, the race card came up many times. David Axelrod, future adviser to Pres. Obama was there as a young reporter, taking it all in. But the campaign took only four months and Chicago had its first black mayor, Harold Washington. It was a fun romp.

You can pick up your copy on Amazon, Amika Press, Kindle, Kobo or Nook.

Now on Goodreads, you can win a free copy of Campaign!: The 1983 Election That Rocked Chicago. Get an insider’s look at Harold Washington’s first campaign for mayor, one of the most historic elections in Chicago’s history!

Peter Nolan’s first book has been called “fine and engrossing and rollicking” by Chicago Tribune’s Rick Kogan and “a solid, workmanlike piece of journalistic history” by Publishers Weekly.

Enter to win here or click the book cover. If you’re not already a Goodreads member, and you love reading, now’s the perfect time to join! (Here’s the book on Amazon if you just can’t wait.)